REDFIN'S 2019 PREDICTIONS: HOUSING MARKET WILL BE COOLEST WE'VE SEEN IN YEARS, BUT HOMEOWNERSHIP WILL CONTINUE TO RISE

We predict that the housing market will continue to cool into the first half of 2019. Inventory will rise back up to 2017 levels, and price growth, while likely still positive, will be the lowest we’ve seen since 2014 or possibly even 2011. Investors and house-flippers will back away from the cooling market, and real estate companies that buy homes from consumers to quickly sell at a profit (including our own RedfinNow) will face their first serious test. Tech companies and local governments will continue to go head to head on local housing issues.

Prediction #1: The housing market will continue to cool

Over the first half of 2019, home-price growth will stay slow. Our forecasts have price growth settling around 3 percent, which would be the slowest price growth we’ve seen in years. As recently as the first half of this year, prices were still growing 7 percent, and price growth has reliably exceeded 5% since the start of 2015. There’s quite a bit of uncertainty around our price forecast; there’s a real chance prices could fall below 2018 levels, putting up negative growth for the first time since 2011.

Sellers will have to adjust their price expectations as buyers grapple with rising mortgage rates and already-high home prices. Metros that saw the most price growth in the first half of 2018 will experience the biggest slowdowns in price growth in the first half of 2019. Seattle, San Francisco, San Jose, Portland, San Diego, Los Angeles, Denver, and Honolulu are a few of the metros where we expect demand to cool the most. “A few weeks ago I helped my home-buying customers get a bid accepted that would have gone straight to the bottom of a pile of offers earlier this year,” said San Francisco Redfin agent Anna Coles. “The offer for a house in desirable Parkside was below list price and included a financing contingency, which allows the buyers to back out of the contract without forfeiting their earnest money deposit on the off-chance their loan doesn’t get approved. The norm for the past two-plus years had been that buyers had to waive standard protections like this in order for a seller to consider their offer, but this is just one sign that buyers may face less competition heading into 2019.”

On the flip side, we expect home prices to continue to grow at a strong pace in a handful of small, affordable, inland markets like Buffalo, Rochester and Greensboro, where the market is still heating up.

We’re going into 2019 with a 5 percent greater supply of homes for sale than we had going into 2018, which is the highest growth we’ve seen since September 2015, but home sales were down 8 percent since last year in November. A still-growing economy and increased access to credit will support more home buyer demand, but higher interest rates will make home-buying more expensive, so it’s hard to say whether home sales will stay down or rebound next year.

Whether total home sales go up or down, more homes will be sold to people who plan to live in the home as opposed to investors, which will cause the homeownership rate to rise. In 2019, homebuyers will enjoy more inventory and less competition from speculators and house-flippers, which will lead to more people enjoying the benefits of homeownership. Homeownership has been consistently growing from its post-recession valley of 63 percent in 2016 to above 64 percent this year. We predict the homeownership rate will grow more rapidly in 2019.

Prediction #3: It will cost more to borrow, but more people will have access to credit for home-buying

Homebuyers have already seen mortgage interest rates increase in 2018, and the Fed’s most recent commentsindicate that it will continue to raise rates perhaps twice or more in 2019, which will push the average 30-year fixed mortgage rate up to about 5.5 percent by the end of the new year. This increase from the sub-5 percent level where rates have been hovering in recent months would mean about a $100 increase in monthly mortgage payments on a $300,000 home by the end of 2019.

Lenders will also feel the effects of rising rates, which will increase their costs of lending and dampen demand for their services. This will motivate lenders to expand their customer base to low-income borrowers and first-time homebuyers. But of course, lenders will charge more for these loans–both to cover the risk of lending to borrowers with less-than-perfect credit and to cover their own costs of borrowing.

In 2018, economic growth was the strongest it has been since early 2015. However, residential investment, which includes money spent on construction, renovations, and real estate commissions, and typically makes up about 15 to 18 percent of economic activity, declined slightly in 2018. In 2019, the economy will most likely grow, but a cooler housing market will contribute less to the overall economy. Even if residential investment were to fall by 10 percent, which has only happened three times in the last 40 years, total economic activity would be impacted by 1 to 2 percent. That isn’t enough to cause a recession as long as the rest of the economy keeps growing.

There could be some spillovers from the cooldown in the housing market to consumer spending. When homeowners see homes sitting on the market longer and sellers dropping their prices, they feel less wealthy. Rising interest rates will also impact more than just home sales. It will be more expensive to finance a car loan, take on credit card debt, or refinance a mortgage to take out equity, which will also weaken consumer spending.

Prediction #5: Fewer homes will be built, but more builders will focus on starter homes

In 2019, homebuilders will be more cautious about building during a cooling market and focus on building starter homes that are easier to sell than luxury homes. We have already seen the per-unit value of single-family residential building permits flatten, and we predict per-unit values of building permits will decline in 2019. Another factor in 2019 will be low unemployment, which will finally cause wages to rise for low-income workers. This will impact both the supply of and demand for housing. On the supply side, higher labor costs will limit the number of homes built. Meanwhile, higher wages will be a boon to demand for starter-homes among working-class Americans. 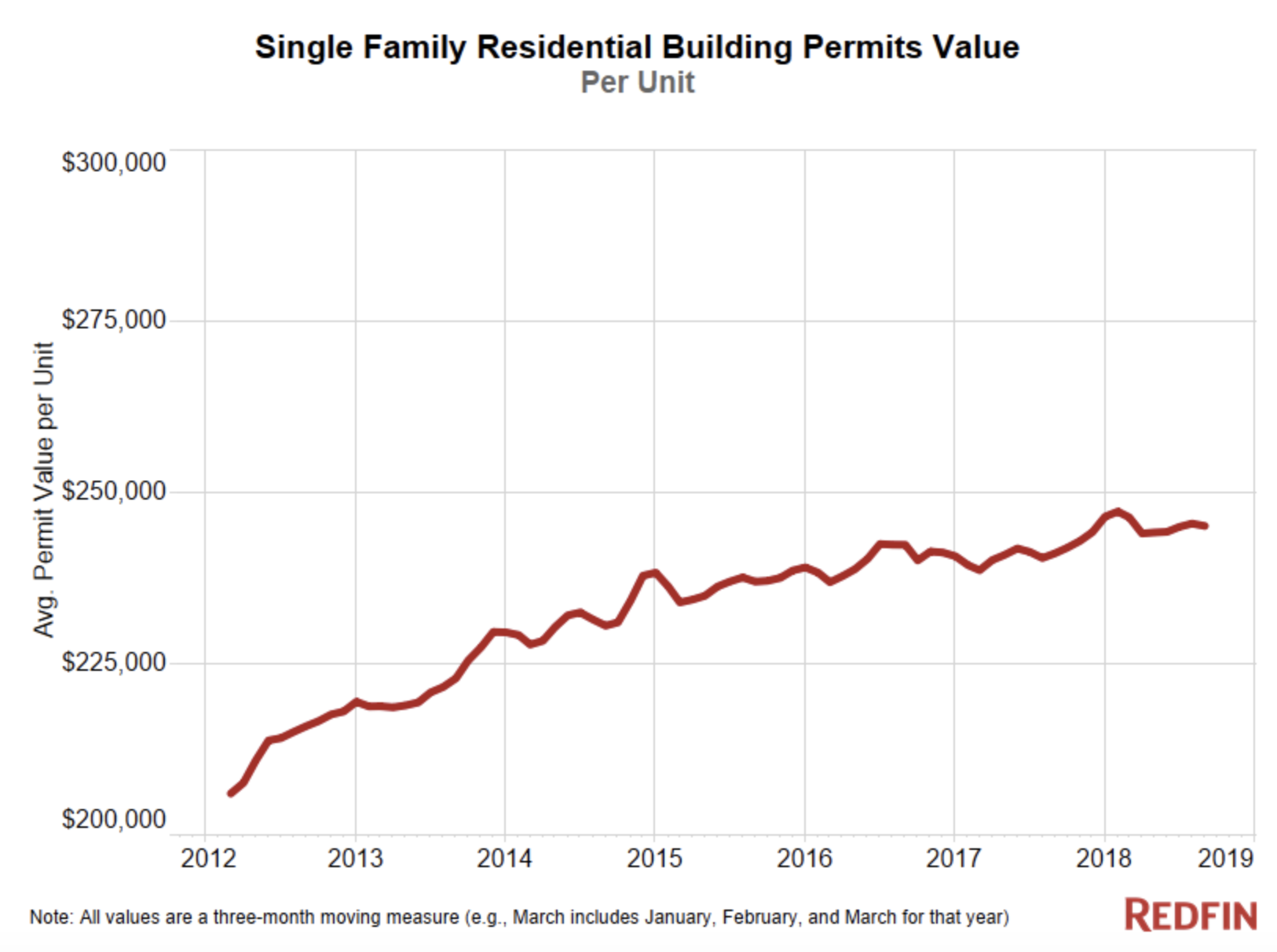 “When we decided to plan our first new construction development, we found a niche in the $300,000 price range in Dallas, where there is a great deal of activity among national and local builders, but almost all of it focused on the high end,” said Pushban Rajaiyan, the lead developer on Brentwood Court by Havendale Homes, a townhome community now available for pre-sale. “It was important to us to offer homes built with high quality materials but for an affordable price and in an area where residents can enjoy nearby amenities and short commutes. Just in the past few months we’ve already begun to see other builders catch on to this unmet need in the market, with other affordable, starter-home options coming available to local buyers soon.”

If home-buying demand falters due to higher interest rates and stock-market volatility, the trend toward instant offers from institutional homebuyers could face its first serious test, a test of pricing algorithms as much as companies’ appetite for risk. Armed with billions in capital, competitors from Opendoor to RedfinNow to Zillow to Offerpad to Knock have been vying with one another to buy homes from consumers and then sell those properties at a profit, with i-buyers’ combined share of U.S. home sales growing rapidly. The question investors are asking is whether instant offers will now be significantly lower, to compensate institutional buyers for the market’s recent uncertainty, and whether homeowners will accept the offers, just to avoid those same uncertainties themselves. Institutional buyers who made money from nearly every sale in a rising market with low interest rates could start to face losses, or may demonstrate more discipline than other housing investors. In 2019, we’ll find out. If i-buying works in a bear market as well as it has in a bull market, instant offers could become a major, permanent sector within the real estate economy. If it doesn’t, a lot of money is going to sink into the sand.

Prediction #7: Tech and local government will go head-to-head on housing

Cities have been struggling with the double-edged sword of tech-company-driven prosperity and inequality. Tech companies bring highly skilled workers to cities and pay them handsomely. This is why 238 cities vied for Amazon’s HQ2. But, shortly after the HQ2s were announced, residents of Long Island City began protesting, advocating for more housing investment to avoid displacing existing residents. Crystal City has planned ahead with 4,000 new housing units, but Amazon plans to hire 25,000 people there. Growing cities will have to start building more housing now if they don’t want to face the affordability and homelessness problems that established tech hubs like Seattle and San Francisco are currently facing.