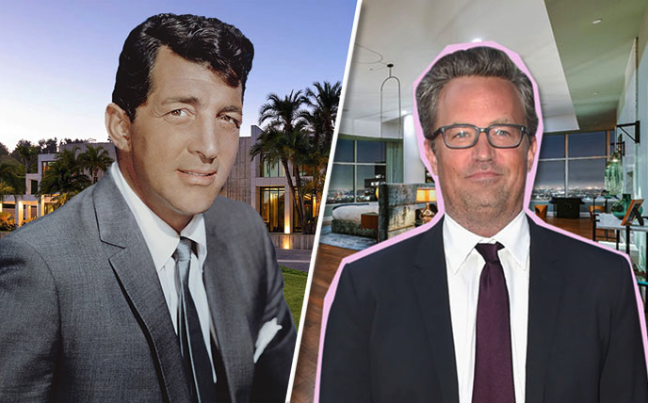 Two famous groups, The Rat Pack and the one from “Friends” — actually one one member of each group — factored into the week that was in Los Angeles celebrity real estate.

Matthew Perry, previously known as Chandler Bing on “Friends,” listed his full-floor penthouse at The Century luxury tower in Century City. The asking price is $35 million. Two years ago, Perry paid $20 million for the condo in the building designed by Related Companies. The unit spans 9,300 square feet and includes four bedrooms and eight bathrooms, as well as a screening room and four terraces, and an ample amount of velvet. The 42-story tower also includes a pool, a movie theater and more amenities.

In neighboring Beverly Hills, a mega mansion with ties to legendary crooner and entertainer Dean Martin hit the market for $75 million. It spans 27,500 square feet and has a modern museum style. It’s called “The Glazer Estate” after its most recent owner, megamall developer Guilford Glazer, and his wife Diane. The current home replaced Martin’s longtime abod on the 1.5-acre property near the Sunset Strip. The mansion now includes six bedrooms and 15 bathrooms, as well as a ballroom and an indoor pool. The estate also has a 98-foot outdoor swimming pool and man-made ponds and waterfalls.

The Brentwood home that once belonged to legendary film actor Jimmy Stewart sold for $8.3 million, Town & Country reported. It was the first time the half-acre property and its 4,600-square-foot house traded in 60 years. The ranch home, built in 1938, has four bedrooms, four bathrooms, two fireplaces and a two-car garage. It appears to have remained relatively untouched since he lived there. Stewart starred in “It’s a Wonderful Life,” “Vertigo,” “Mr. Smith Goes to Washington,” and a host of other films.

Embattled former “Empire” actor Jussie Smollett took a $30,000 loss on the sale of his Studio City home, Variety reported. Smollett, who is facing a lawsuit from the city of Chicago over his alleged hate crime hoax earlier this year, sold the 2,600-square-foot home for $1.6 million in an off-market sale. It has three bedrooms and 3.5 bathrooms, and a security system complete with cameras.