Across the globe, 330 million families can't find a decent affordable home to live in, and the problem is rapidly growing worse, according to a working paper issued last year by the World Resources Institute. As this 2015 Reuters story details, the slums of fast-growing cities in Latin America are filled with haphazard shacks built from scrap metal and wood, erected by impoverished urban dwellers.

But now, Austin, Texas-based construction technology startup ICON and San Francisco-based nonprofit housing organization New Story may have at least part of the answer to the world's affordable housing problem. They've developed a house that can be built in fewer than 24 hours, for a projected cost of less than $4,000, using a special mobile 3-D printer that is designed to work in rugged conditions in developing countries.

ICON and New Story recently demonstrated the technology in Austin, by producing what reportedly is the first 3-D-printed house in the U.S. that's up to code and fully permitted for people to live in.

"We wanted to build and meet the highest of U.S. housing codes to prove the technology has the ability to build safe, strong homes that can face hurricanes and earthquakes," New Story co-founder and head of product Matthew Marshall explains in an email. 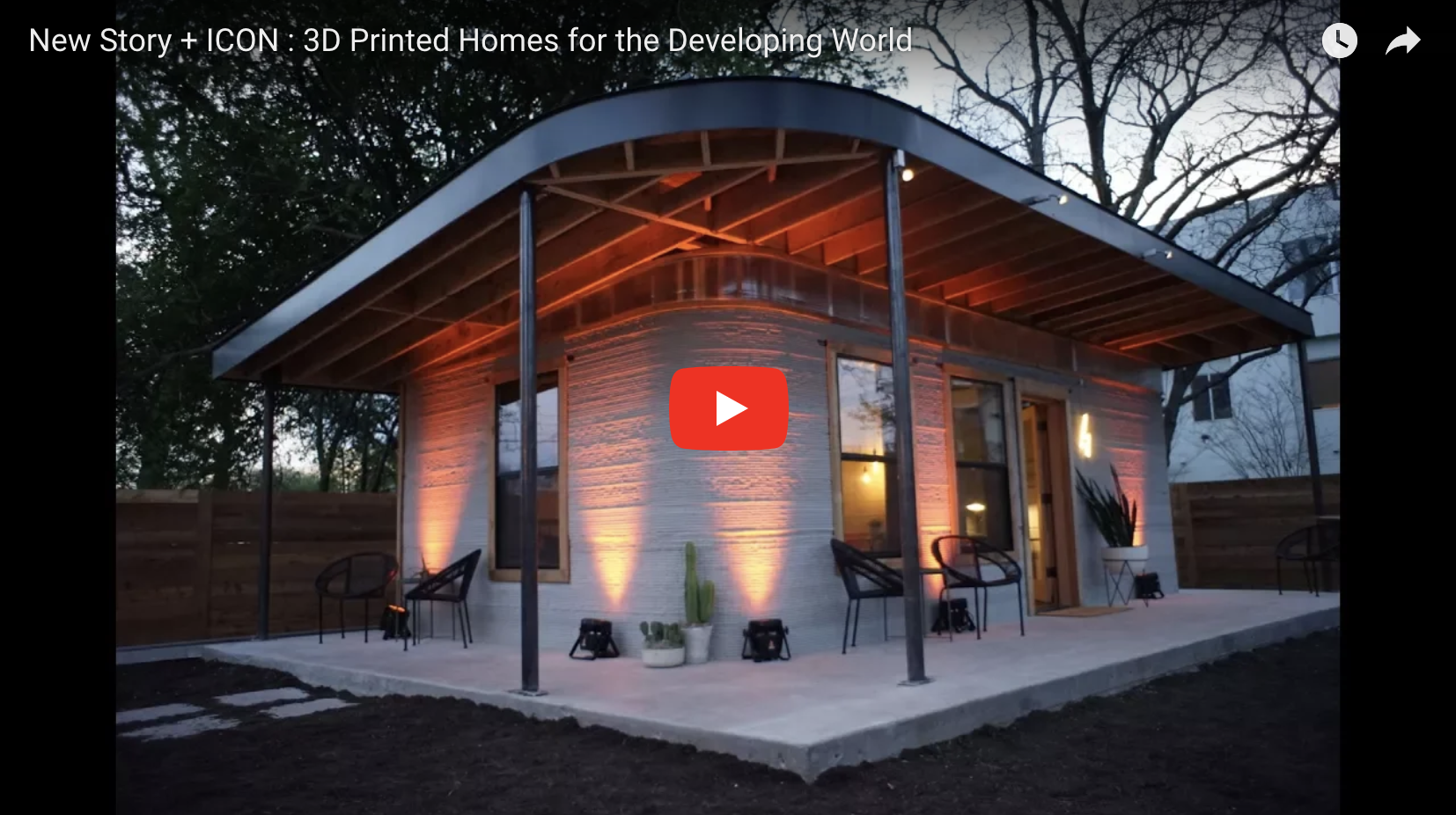 In an email, ICON co-founder Jason Ballard says that he and his partners, Alex Le Roux and Evan Loomis, began working together in early 2017, out of a mutual interest in finding a more efficient, less wasteful way to build affordable houses. "Approaches to construction hadn't changed in so long it was like people had forgotten how to even imagine a different way," Ballard explains.

The key breakthrough was development of the Vulcan 3-D printer, a gantry-style device that moves on rails to build the home, layer by layer.

"The key differentiator with what we are doing is that we are focused on whole-home site-printing," Ballard explains. "Many other companies working in the space print in warehouses, or only print pieces of a home that are assembled elsewhere. We believe this surrenders many of the basic advantages of 3-D printing. We have several patents submitted in hardware, software, and materials, and several more in process."

Ballard says the printer is lightweight and designed with minimal bells and whistles, making it rugged and dependable. The current model uses inexpensive basic concrete as a building material, but ICON is exploring the use of other materials in the future as well.

New Story's Marshall says that concrete is more resilient and energy-efficient than building materials such as drywall and particle board, which are staples of home construction in the U.S. And by using 3-D printing to build a structure in layers, it's possible to build with near-zero waste. The process also affords "tremendous design freedom – curves and slopes are no more challenging or expensive than straight, plumb lines."

While it took about 48 hours to print the demonstration house in Austin, the printer was running much slower than its potential speed, Ballard says. Once the houses are in production, it'll be possible to create one in a day and possibly as little as 12 hours, with as few as two or three workers.

While the printed portion of the demonstration home cost $10,000, ICON and New Story have a goal of getting the production cost down to $4,000 for what Ballard says will be a "very basic, but solid and weatherproof, house."

New Story is currently trying to raise $600,000 for additional R&D, and another $400,000 to build 100 homes in El Salvador that would comprise the world's first entirely 3-D-printed community. They're hoping to begin construction in 2018. Medium has a more detailed explanation of the project.

Ballard says that 3-D printing is the way of the future in home building, and not just in developing countries. "I think it is a revolutionary paradigm shift in home construction that is better in every way: speed, cost, design freedom, energy efficiency, maintenance, resiliency, waste and comfort," he says.

"So whether you are building a house in El Salvador or in San Francisco our opinion is that it should be 3D-printed, at least if you care about cost, sustainability, and human well-being." He says that ICON plans to unveil additional projects in months to come.

Dubai launches world's first "functional" 3D printed office building. 3D Printed Building Of 250 square meter structure, Comprises Of A Single Floor With All amenities was printed in 17 days, and assembled in just two days. Goal behind the project, officials say, is to push the envelope on technological development, innovation and creativity. Machine responsible for printing out the office building is a massive warehouse size printer that stands at about 20-feet tall, 120 feet long and 40 feet wide. 3D printed office is the temporary home of the Dubai Future Foundation, the entity responsible for building yet another futuristic structure.